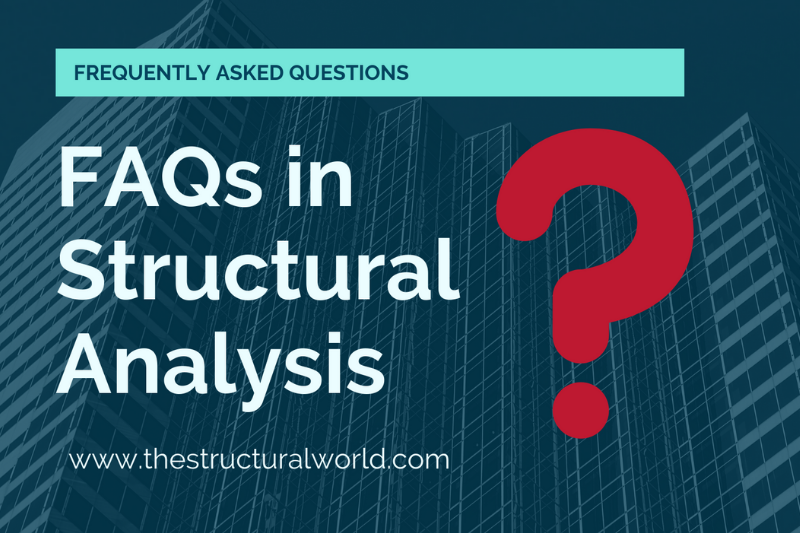 Throughout the course of our endeavor as a Structural Engineer, we always come up for questions that challenge us and trying to figure out the solutions. In Structural Analysis, there are tons of questions out there waiting to be answered. Some answer to these questions is easy to find and the others can only be answered by experience. Knowledge is continuous learning, even the most experienced engineer is continuously learning in his/her daily experiences. Sharing the knowledge that we have learned is a noble thing to do to spread the information for those struggling and needed it the most.

What is the difference between Static and Dynamic Analysis?

Static Analysis is considered for regular building less than 240 feet (72 meters) and irregular story 65 feet (20 meters) or less. It can also apply to regular or irregular structures in seismic zone 1 and in occupancy category 4 and 5 and in Seismic Zone 2.

Dynamic Analysis is considered for regular building above 240 feet (72 meters) and irregular over 65 feet tall (5 stories) and of those buildings located in poor soils and of a time period with more than 0.7 seconds period.

What is the concept of Modal Analysis and how many modes do we need to consider?

What is Torsional Eccentricity and how it will be accounted for in the design?

Torsional Eccentricity is created when the center of mass and center of rigidity or resistance in the building do not coincide. The distance between these two points is referred to as torsional eccentricity.

What are Structural Irregularities? Explain.

Structural Irregularities in buildings are composed of the weak story, soft story, and vertical discontinuity. Refer to the previous article - Understanding Seismic Parameters for further understanding.

How to scale the Elastic Response parameters calculated by Dynamic Analysis and why?

A Scale Factor or scaling of the results calculated by dynamic analysis is used to reduce the elastic response parameters. This is usually done to normalize the forces and to distribute it properly while the code level forces are being maintained. Refer to this article for more.

What are the different structural systems? Explain about Dual System?

What are the two methods used in the analysis to combine the SPECX and SPECY effect?

What is the difference between Rigid and Semi-rigid diaphragm?

RIGID DIAPHRAGM can rotate and it can translate, but cannot deform. The lateral forces will be distributed & redistributed at the subsequent levels based upon the relative stiffness of all the members resisting lateral loads at each level. When applied in software, the beam in the lateral system had no axial force.

SEMI-RIGID or Flexible DIAPHRAGM is used mainly for defines the wind load and give the building the ability to behave as its actual behavior.

How to include the effect of the Vertical Component of the Earthquake in the analysis?

The load effect resulting from the vertical component of the earthquake ground motion and is equal to an addition of 0.5CaID to the dead load effect, D, for strength design and may be taken as zero for allowable stress design.

What is the physical meaning of “Damping” and give examples?

Damping measures and describes how a system or a building, for example, reacts after a disturbance or movement in the form of an earthquake. Many systems exhibit oscillatory behavior when they are disturbed from their position of static equilibrium. A mass suspended from a spring, as another example, might, if pulled and released, bounce up and down. On each bounce, the system is "trying" to return to its equilibrium position, but overshoots. Sometimes losses (e.g. frictional) damp the system and can cause the oscillations to gradually decay in amplitude towards zero. The damping ratio is a measure of describing how rapidly the oscillations decay from one bounce to the next.

In structures designed to resist seismic, what is a “Collector Elements”?

COLLECTOR ELEMENT is a member or element provided to transfer lateral forces from a portion of the structure to vertical element of the lateral force resisting system (LRFS).

What is Story Drift?

Story Drift is defined as the lateral displacement of one level relative to the level above or below or simply the difference of the deflections at the center of mass at the top and bottom of the story under considerations. The difference between the roof and floor displacement is called inter-story drift.

There are surely a lot more questions in Structural Analysis that you encountered and might think of. Share us your thoughts. Feel free to leave your questions or even with an answer, we are glad to include it on the above lists of FAQs for everyone to be informed of. Let us interact; everyone is welcome to view their opinion whether it is based on facts or their experiences. Cheers!

What else are the questions that we can add to the above lists? Tell us your thoughts! Leave your message on the comment section below. Subscribe to our newsletter to be updated with the latest posts or follow us on our social media pages on the below icons.